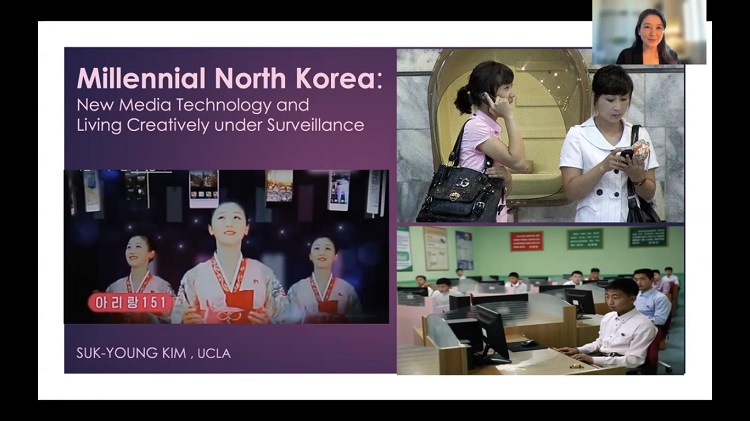 North Korea might be known as the world’s most secluded society, but it has witnessed the rapid rise of media technologies in the new millennium. While the North Korean state is anxiously trying to catch up with the world standard of communication technology, it is also faced with the need to block free influx of outside information by allowing only intranet to its people. In a country where smuggling foreign media still can be punished by public execution, how do North Koreans manage to access outside information? This project explores how the expansion of new media technology complicates the country’s seemingly monolithic façade mired in entangled networks of technology and surveillance, intellectual property and copyrights, and the way for millennials to live creatively with censorship and relatively freely under surveillance.

Suk-Young Kim is Professor of Theater and Performance Studies at UCLA where she also directs the Center for Performance Studies. She is the author of Illusive Utopia: Theater, Film, and Everyday Performance in North Korea (Michigan, 2010), DMZ Crossing: Performing Emotional Citizenship Along the Korean Border (Columbia, 2014), and most recently, K-pop Live: Fans, Idols, and Multimedia Performance (Stanford, 2018). Her scholarship has been recognized by the James Palais Book Prize from the Association for Asian Studies, the Association for Theater in Higher Education Outstanding Book Award, and ACLS/SSRC/NEH International and Area Studies Fellowship. Currently she is working on a book titled Millennial North Korea: Forbidden Media and Living Creatively with Surveillance and is editing Cambridge Companion to K-Pop.